Many years ago, Mr. K visited our GroupZ meeting in Buena Park and I and a couple dozen die-hard Z enthusiasts enjoyed a fudrucker hamburger with him, his son, and his grandson. Then, in 2004 I had the privilege of meeting Mr. K again at the National Z convention in Long Beach. Here he is by what was once his personal Z. He signed my 240Z manual (see below) and shook hands and kindly greeted every Z fan. Great memories and such an honor to meet the man behind the Z. 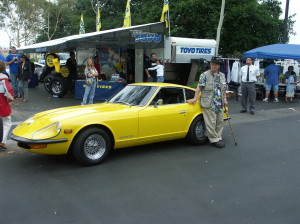 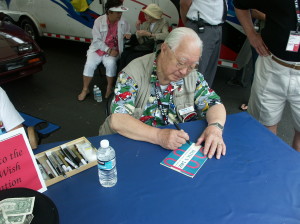 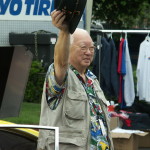 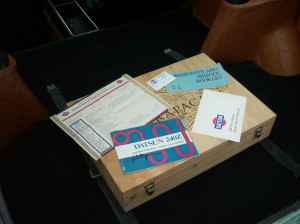 An 87-year-old Japanese kite flyer with a penchant for picking up speeding tickets — Mr. Yutaka Katayama — is the inspiration behind Nissan Motor Corporation U.S.A.’s (NMC) announcement of a company wide initiative to meet the demands of today’s consumers.
Nissan’s two-fold mission to put prospective and current Nissan owners first, and the powerful $200 million consumer-centric advertising campaign unveiled this year, rests upon a foundation built by Katayama, one of the most revered men to ever work in the automobile business.

Mr. K, as he is affectionately called in the U.S., was president of NMC from 1965 to 1975. Raised and currently residing in Japan, Mr. K’s passion for cars brought him to Nissan in 1935 and, ultimately, to the United States and the world-renowned California “Kar Kulture” of the high-flying 1960s.

Katayama understood the special bond that exists between man and machine. Cars were his life. And as the son of an affluent businessman, he came to understand that by being truthful and honest one could successfully sell cars. In fact, Mr. K’s consumer-first approach is at the very heart of the company’s mission to put perspective and current Nissan owners first.
More than 35 years after Mr. Katayama first came here, the U.S. is still a nation of “car lovers.” Nissan’s new, two-minute “Dream Garage” commercial, and indeed the entire $200 million campaign, taps directly into this deep-seated emotion.

In “Dream Garage,” a mystical Japanese character in a Datsun cap magically introduces the automaker’s classic model entries, accomplishments and company spirit to a wide-eyed young boy — who embodies the car lover in all of us.

This mystical character, representative of the company’s rich heritage, shares the same zest for living and the same love for cars as Mr. K.

Katayama holds a lofty place among auto industry greats. He was the driving force behind the success of the 240Z. The stuff of industry legends, it was the first dependable, affordable performance sports car ever sold in the U.S. and it was Mr. K’s baby. He designed it, got it built and sold it. The car, in the words of many veteran dealers, made the franchise.

The “sports sedan” concept was virtually invented by Mr. K, who introduced the Datsun 510. This car blew the doors off of comparable BMWs in its day. And, now that pickups are routinely the biggest-selling vehicles in the U.S., it is important to note that Mr. K and Datsun pioneered the small pickup truck and King Cab more than 35 years ago.

An industry legend, Katayama is known for many things: his skill at the gaming tables; love of kite-flying and dancing; his talent as a watercolorist; and his need for speed — he regularly received tickets for violating the limit and, for years, was on a first-name basis with members of the local police force.

He is a people-person and his charisma is legendary — as is his love of Americana, from Stetson hats to barbecue and professional sports.

Most of all, Mr. K’s many friends and associates admire his respect for people, and his honesty and sincerity. Despite the demands of running a major business, Mr. K personally signed his holiday cards each year — all 22,000 of them. Dealers received desk plaques from him, engraved with the words: “Truth and Honesty.” His credo was known to all: “Love cars. Love people. Love life.”

thanks to this website for this article on Mr. K